Home » Discontinued » Cross and the Switchblade 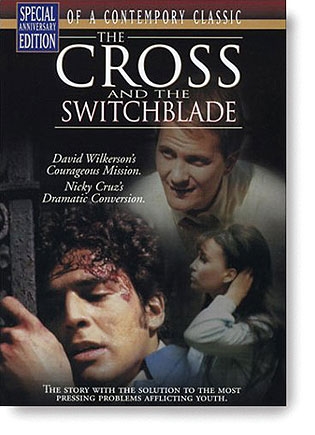 Cross and the Switchblade

Although the original events depicted in this classic from the drug infested, gang dominated streets happened over thirty years ago, the
life-changing solution that David Wilkerson brought to desperate lives was just beginning. The beat goes on. The change in the life of
notorious gang leader Nicky Cruz, as shown in the film, proved to be wonderfully lasting and real. Nicky continues today to reach
young people around the world with the same life-changing message of the gospel of Jesus Christ that delivered him from violence
and despair. And what about the skinny preacher, David Wilkerson, who braved the meanest streets of New York to tell desperate and
drug crazed youth that there was a better way? Now, three decades later, he is still at it with a ministry based in Times Square that is
still changing lives and offering genuine hope to countless souls who had given up on life.

Now in over 25 languages, The Cross and the Switchblade, starring Pat Boone and Eric Estrada, is one of those rare films that has
shown its unique power to connect with the deepest hopes and fears of youth around the world. It remains today one of the most
compelling stories of love, grace and the truth that no one is ever so far gone that they cannot find the way out.

Bonus Material:
Director’s Commentary,
Producer’s Commentary,
-Biographical information on actors, director’s commentary, testimony by Nicky Cruz, and a look back on the making of the film and
its impact
-Chapter titles for easy scene access

Only
Pricing based on selection