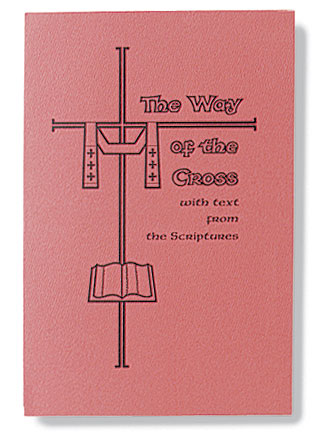 The Way of the Cross with Scripture (Large Print) - 50/pk

During the Turkish occupation of the Holy Land in the late Middle Ages, when pilgrims were prevented from visiting its sacred sites, the custom arose of making replicas of those holy places, where the faithful might come to pray. One of the most popular of these devotions was the "Stations of the Way of the Cross," which were imitations of the "stations," or stopping places of prayer on the Via Dolorosa in Jerusalem. By the late sixteenth century the fourteen stations as we know them today, were erected in almost all Catholic churches.
A "fifteenth station" is added here since the Passion of Christ is meaningless unless the Resurrection is kept in mind. Passion, Death, and Resurrection is the new Passover, from the death of sin to the life of freedom in love. This "fifteenth station' should be done before the Resurrected Christ in the tabernacle. 16 pages.