In late October of 1946, young Ignatius DiGiovanni was admitted to St. Vincent's Hospital in Brooklyn, New York. A childhood injury had left the 25-year old man with a misaligned jaw that needed to be broken and reset.

Surgery in 1946 was crude by today's standards, and Ignatius lay in bed, out of work for six months, while his wired jaw healed.

During his hospital stay, a chaplain visited often, bringing with him current works of Catholic writers. Being a lapsed Catholic, Ignatius found little or no use for the many books and pamphlets. Remember, however, there was no television in 1946, and hour upon hour in a hospital room gave way to profound boredom, so much so that even Catholic reading became an option. In the beginning, Ignatius read to refute a good debate with the friendly chaplain would at least kill some time but the more he read, the more he was moved. He found solace and depth where there was emptiness, and the peace he felt with prayer was a solitude that he had never felt before.

With time, he gained strength, and after leaving the hospital, he continued to read and attend Mass. The Catholic Church became a real focus in his life, and he volunteered his time at Our Lady of Mt. Carmel Church in Brooklyn and St. John's Church in Manhattan. Ignatius was now reading Catholic dogma, Catholic history, and biographies of many of the saints. St. Augustine, whose conversion took place late in life, and St. Thomas Aquinas held much interest for Ignatius because he felt they were both intellectual and spiritual.

When the pastor of St. John's Church offered Ignatius the job of manager of the church bookstore, he immediately resigned his job at the Irving Bank on Wall Street to pursue his dream.

The year was 1948 and the Franciscan Fathers at St. John's were not quite ready for the whirlwind of activity that was taking place in the new and improved bookstore. Ignatius restocked the shelves with important reading from the most current Catholic writers of the day, and started carrying religious jewelry and other popular religious articles. He began modest advertising in The Franciscan Times and wrote to many prominent Catholic priests in the New York area to visit the store. 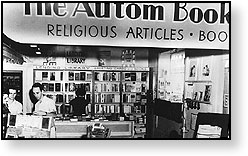 As business improved his health declined, and his family doctor suggested on numerous occasions that he move to a warm, dry climate. After much discussion with his new bride, Ignatius decided to start his own religious goods business in Phoenix, Arizona, with combined savings of only $1600 and sheer will to succeed. Ignatius chose a name he had been thinking about for years: Autom was born in 1948, half for St. Augustine and half for St. Thomas Aquinas.

Ignatius DiGiovanni, new to town, somehow convinced the Franciscan Fathers of St. Mary's Church to pay his first six months' rent at the Phoenix bus terminal if he used, in his words, his "vast experience" in the religious goods business to open a retail store. The optimism of the moment was tempered somewhat by the gross sales of the first day, a mere $.75, but business improved and the word spread that a young man and his new wife were offering the growing city of Phoenix its first Catholic bookstore. Ignatius noticed that many young priests were stopping by the store in its first year. It was usually on their day off and the only transportation they could afford was the city bus. Therefore, as luck would have it, all the potential pastors of the boom-town of Phoenix would pass by the small retail store on their way to downtown. Friendships were forged that would last a lifetime, and Ignatius bonded with the future leaders of the Diocese of Phoenix and Tucson.

Business and the inventory grew, and Ignatius moved the firm to a storefront at 40 East Monroe in downtown Phoenix in 1951. Many large Phoenix retailers were now his neighbors, including Korricks, State Office Supply, Paul Johnson's Jewelers, Skomer's and Diamond's Department Store. In the days before shopping malls, this was as close as Ignatius DiGiovanni could get to the perfect location. 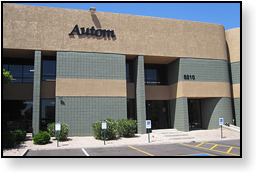 Following the advice of his accountant, Ignatius in 1957 purchased some land on North 7th Street to house the growing new Autom Company, and in September of that year, built a brand new 6,000 square foot building. All the supplies a church needed were now available in one beautiful location. Ignatius traveled throughout Arizona in an effort to promote Autom to churches around the state. The Tucson Diocese churches became an important part of the overall business and in 1962, Ignatius opened an Autom Store in Tucson on North Speedway Road.

Business prospered through much of the sixties, but changed dramatically after the second Vatican Council in Rome in 1968. Pope John XXIII introduced change to the Catholic world that is still being felt today. The industry as a whole was shaken and splintered, and many old prominent firms dissolved or went bankrupt. Autom held its ground with general belt tightening and forged ahead. Many things changed but new opportunities presented themselves.

In January of 1973, Ignatius DiGiovanni collapsed at church on Sunday, and was rushed to the hospital. After three days of testing, doctors found a brain tumor. Ignatius spent most of 1973 in and out of hospitals and clinics, subjecting himself to radiology and chemotherapy to reduce a malignant tumor. The prognosis held no hope and in October of that year, 55-year-old Ignatius DiGiovanni died.

The DiGiovanni Family unanimously agreed that Autom should continue as a viable growing entity. The DiGiovanni boys, Paul and Thomas, pressed on in the tradition of their father but found new ways to make the business grow.

Many kind and committed people have participated in the fantastic growth of Autom. Without their support and effort, the Autom of today would be only a dream. An equal challenge is in store for tomorrow: The five DiGiovanni family members, along with Autom's managers, must lead everyone to the new Autom that is mindful of the past, but bold enough to secure a place in the future.